It was perfect, was it not? A clear night, perfect for football. A homecoming game that was ours to spoil. A rival school that had been heaping piles of trash talk on us all week long. Notre Dame had never seen anything like what it saw the evening of September 23rd. The stage was set for something incredible, and when the smoke from those ironically-inappropriate fireworks cleared, Notre Dame emerged from the football game against Desert Mountain an entirely new kind of beast.
I will be honest, until this year I never took the Dog Pound too seriously. Come on, all the student-fans could put together was a little end section at the far side of the bleachers? What is up with that? But this year, the leaders of the ever-growing fan base have taken things to a whole new level, and at Desert Mountain, anyone could see that. It was not only the biggest, loudest road crowd I had seen at a NDP football game, but the best road crowd I had seen at any game.
It is no secret what brought the crowd together, and whether you call him Coach, Len, or Mr. Bemis, the man somehow found a way to make an impact on our school without even being there.
Even looking outside of sports, it is apparent what he has done for our school. I still remember his class from freshman year: one Rhett Johnston spending half an hour wandering campus as he looked to deliver a pass to Room 208, a young Jordan Gehrke asking who in God’s name Joey Schmagmire is, and the constant bombardments of “Dazz Money, your sister gotcha again on that last test. Now what are you going to do about it? Let’s go, gotta make a play kid!” B Period physical science was just one example of how Mr. Scot Bemis affects those around him. Geez, even my freaking parents still talk about how much they liked his class, and they were not even in there!
Someone like that deserves the kind of game that Desert Mountain brought. It was one that showed the resilience of a team that was looking for a way to prove to everyone that they could handle the big boys in the new division. But it did more than that. It showed that Notre Dame was a school that could unify in its search for respect. We could show everyone that we were anything but the goody-good Catholic school that had everyone genuflect before each class.
This is what the Dog Pound has been about all along, and finally, we have caught on.
There is no point in saying that NDP has not struggled with school spirit for the past few years. It simply has not been there. But whether you are a fan of uniforms or not, whether you support student mass or not, and whether you agree that those darn juniors deserve a surprise day or not, you know that the game last night was a defining moment in NDP history. Because for the first time, everyone was able to forget about all of the things they may disagree with about old Notre Dame and cheer on the Saints.
In supporting Coach Bemis, you supported Notre Dame. I think that everyone knew that going into the game, and the best part is, I do not think anyone cared. This marks a turning point in Notre Dame spirit, because on the night of the Desert Mountain homecoming, we came together as a school and as a student body. We were our own kind of team, and that is something that would have made one straw-hat-wearing fellow very proud indeed.
When Gehrke found Andrew Thomas in the back of the end zone with just under three minutes to go, it did so much more than put the Saints up 27-24 and cap off an incredible comeback win. It went beyond a football game; it went beyond beating a rival. When the Dog Pound saw the touchdown, the place went absolutely insane. Football junkies were screaming, and football rookies were screaming. Hockey players had something in common with pommies, and the BAM club had something in common with the hiking club. Seniors could relate to freshman, and AP Foreign Language students found common ground with our friends in Study Skills. For the first time, we were all saints. And we were all proud to be saints.
September 23rd was the night our school became one. It was something unforgettable; it was something special. We believed we would win, and at the end of the night, we had won a lot more than a rivalry.
Just be sure to thank Desert Mountain for those fireworks. 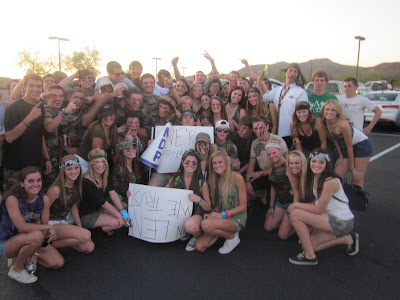 A successful hunt? You bet it was.
Posted by Tyler "Dazz" Daswick at 6:16 PM No comments:

A Cinderella Story: How Sports Have Helped us Through 9/11

The College Quest--Part V: How Davidson Honors the Code 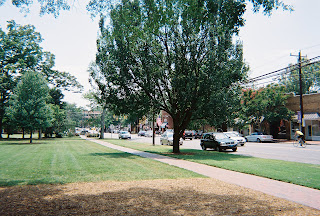 There’s your town of Davidson. Everyone loves the Wildcats here. 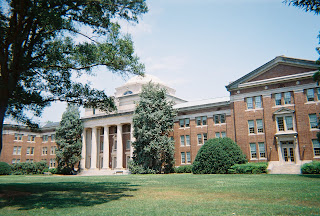 A lot of the nicer buildings show up as you move away from the street and more toward the center of campus. 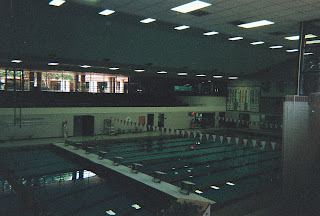 Here’s the pool. It’s attached to the rest of their gym, including the basketball stadium.

You like yourself some b-ball? This isn’t half the seating. Additional courts on either side of the seats you see are covered with extendable stands during games. Try to find them on TV sometime and you will see what I mean. 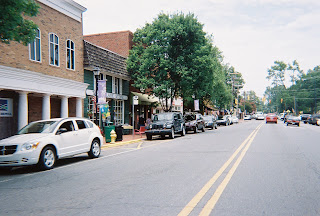 Well isn’t that just the cutest little town you’ve ever seen? Still feel dumb I didn’t know it was called Davidson.
Questions or additional comments about Davidson? Share them in the comment section! I’m sitting on everything from hard numbers to more detailed information, so feel free.
Posted by Tyler "Dazz" Daswick at 4:58 PM No comments: