If you ever wondered who the gang of guys was who frontlines the Dog Pound at every basketball game, you are about to find out. This is the Goon Squad, a private organization formed by Goon Captain Brooks Brennan as a unit that is totally separate from the Dog Pound, and a unit that “is about making the other players feel little.” Brennan would continue, “We want to act as stupid as possible, and [we’re about] going super-hard at basketball games.” 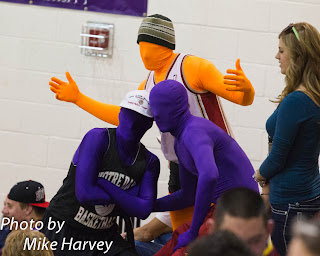 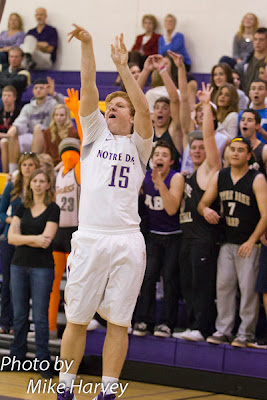 Do you believe in miracles?
Drain.
YEEEEEEEEEEEEEEEEEEEEEEESS!!!!!!!!!!!!!
The front row of the Goon Squad jumps to the court, and myself and the second row leap over the first row to court level as well, jumping up and down and yelling and screaming and holding those threes in the air. I lose my hat. My notes tear. I do not care. It was unbelievable. It made the whole night.
8:20—Parker Zellers rejoins the Squad for the final minute. I guess they all find their way back home eventually, right?
8:21—Ball game. Notre Dame Saints 74, Coronado Scrubs 42.
At first glance, you might see the Goon Squad as a group of guys who are clearly up to no good, but there is more that lies beneath the surface with these men. At the end of the day, this is just a bunch of guys who are here to support their buddies on the basketball team by providing an unmistakable home court advantage. “It makes a huge difference, we’ve never had crowds like this. It drives us to play even better, work even harder. It’s just great to know we have so much support from our fans,” said Dan Ziemann.
If you have a problem with their methods, that is too bad, because from what I experienced, they will not change for anybody.
The Goon Squad is what Notre Dame has been looking for all of this time. I sat down with Monica Barrett at the beginning of the year, and she voiced that she believed basketball season to be the biggest challenge to NDP school spirit. Well I think we have more than answered that call, and the Goon Squad is largely to blame. Our school finally has hardcore fans, and I think that denying these people their cheering rights just because of a few taunts toward the other team would be a disservice to our athletic program. Notre Dame needs to prove that we can be rough and tough and that we can hang in there and talk smack with the rest of them. If it is image you are worried about, never fear, because what these guys are providing is spirit driven by spirit, and not spirit driven by malice or hate.
That is key. While other fan bases jeer simply for the sake of being a bunch of toolbags, the Goon Squad jeers at the opponent because we love our boys down on the court, and we want to support them.
I went into the Saints’ locker room after the game, and the first person I spoke to was Avery Korth. He was still smiling. I asked him about his shot, and he came over and made sure I wrote down exactly what he wanted me to write, “I saw the Goon Squad ready to charge the court. I popped the [shot] . . . I did it for the fans.”
The fans did it for Avery too. These are the moments that define the Goon Squad. Without the Squad, that shot was just about meaningless. The Saints were up big, and all we were doing was running out the clock, so to speak. But with the Goon Squad cheering on every player from the full-time starters to the back of the bench, that shot meant everything. It was one of the coolest moments of the year, and I guarantee you that because of the reaction it had from the crowd, Avery Korth will remember that moment for a long time.
The Goon Squad may look to psyche out the other team, but more than anything, they are about making our guys feel like superstars. They are Notre Dame fans, pure and simple. We need them. The team needs them. So cut them some slack, because they can make the little moments feel like the big moments. 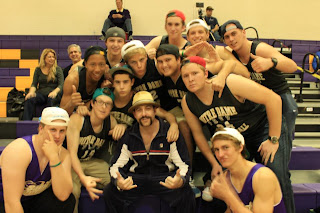 To quote Andrew Thomas on what the Goon Squad means to the team, “Everything. Not one three was made in [their] corner the entire season.”
Posted by Tyler "Dazz" Daswick at 7:12 PM