Five Pumps of Testosterone--How to Make a Better Mr. NDP

I am psyched for Mr. NDP. I will be honest, I want to know who will do it and what talents they will dream up and what kind of spectacle will be put on this year. But with these thoughts put out there, I grow even more excited. We could have something really awesome here. Mr. NDP right now is a budding contest just poking its head out from underneath the soil, and it has the ability to grow into something that really makes someone feel proud to be representing our school.
And after all, that is what this whole thing is about anyway.
By the way, if you now fully expect Mr. Cogliani to go for Mr. NDP, join the club. 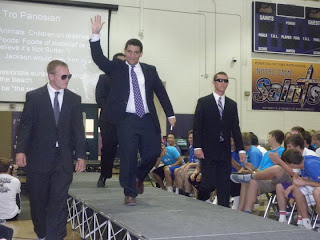 This moment was sweet. But add in lights and a stage and replace all of the freshmen with people who actually know you, and you have Mr. NDP gold, my friend.
Posted by Tyler "Dazz" Daswick at 9:17 PM