Three Keys to the Game: The Hunger Games Preview

The Hunger Games will be released in theaters on March 23, and if the advertisements are correct, “the world will be watching.” This flick is calling itself the Movie Event of the Year, and I suppose if something can wake me up at 4:30 the morning before it is released just to write an article about it, that description must be pretty close.

If you never worked your way over to The Hunger Games, or if you do not really read in general, here is the scoop: the novel follows a female protagonist, Katniss, as she is forced to enter the annual Hunger Games against 23 other young people (one boy and one girl from each of 12 districts, which make up the country). The Hunger Games are put on by an oppressive government known as the Capitol, and the winner of the Games earns food for their district for a full year. The only catch: to win the Games means to be the last person alive.
Essentially, a lot of people are killed. If it sounds badass, that is because it is.
Over recent years, The Hunger Games trilogy has spawned an enormous fan base, and while the last two books are still up for debate (personally, I think the drop-off between books one and two is staggering, and book three is downright lazy, but others will tell you that all three hold their own), the first novel is commonly heralded as the best in the trilogy. So arguably, this movie is more important than the two sure-fire sequels bound to follow. They have to do this book justice. If the producers drop the ball, then this movie, and even this trilogy as a whole, could snowball into an unprecedented disappointment.
In order to gauge the movie’s success, the hard-working staff (of one) here at According to Dazz has assembled three critical pieces of criteria that this movie needs to meet. Fans are looking for this movie to meet every bit of the hype, and while that is a tall order, it is possible. So let the games begin (Yikes, just writing that made me cringe, but we are on a deadline here, and sometimes you just have to shoot a hostage, am I right?).
1.       The violence needs to be violent.
Pretty obvious, sure, but one of the standout qualities of the book was Suzanne Collin’s ability to make the action completely shocking. When the Games begin and people immediately start murdering other contestants, the brutality is incredibly apparent. While the movie carries a PG-13 rating, it should still be able to capture the violence without being cheap. This is a movie based on what is, at its core, an action book. A lot of people die, and in the book it hits hard and it hits fast. If Suzanne Collins can describe exactly how someone threw a knife into someone’s back and killed them on the spot, then the movie needs to give the audience more than “shoots the arrow off-screen, hears the scream, cut to the dead body.” This is a book about the dynamics that exist between characters amidst a total bloodbath, so it might sound strange, but this needs to be a bloodbath. It is not a kiddie situation, so kiddie tactics should not be used. Off-screen action is not action, because the viewer cannot see what is happening. Fans want to see what the books explain, and anything short of that would seem like reluctant or safe film-making. 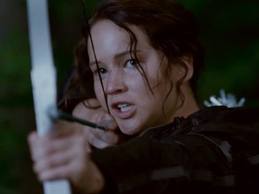 Katniss needs to bring the intensity. That means more of this face.
2.      The love story needs to be effective.
Without giving too much away, there is a romantic twist about a third of the way into the movie, and the results of this twist go on to affect the entire trilogy. So if we are going to be watching two more movies with these love-story dynamics playing out, we better not have any reason to be tired of them after part one. This means that the romantic scenes (and gentleman, there will be, so be ready) need to bring the emotion and the conflict that are present in the book. It is hard to elaborate without revealing key plot points, but what I can tell you is that even from a male perspective, the romantic subplot of the first book was actually not annoying. This means the movie cannot make it annoying, or a lot of male viewers will be turned off. No teen melodrama or whiny angst, just tell the story you need to tell and move on. Guys can return to their action, and girls will be satisfied with their romance. Everyone wins.
3.      The ending needs to be the knockout punch.
To me, it was the only knock on the book. The book did not end, it just stopped. There was no real conclusion or closure or anything of that sort. It just seemed like Collins had been sitting there going at it and suddenly realized that she had two other books to write, so she decided to end the sentence and call it a day at that moment. It was very annoying to read, because it did a lot to kill what had happened so far. The book had an exciting climax, some riveting twists along the way, all of that good stuff, but the ending just did not have that “Boom. My name is Suzanne Collins and my book just kicked your stupid ass” feel to it. It felt more like a “Buy the next one.”
The movie cannot do this. The movie has to have a conclusion that would allow the viewer to stop at that point in the trilogy, if they so choose, and still take something from the experience. The ending of a movie is what defines the way we look at it. If the ending is cliché, then so be it. If the ending is a twist, wow. If the ending is rushed, then it just looks lazy. The last thing any viewer wants is to feel like the filmmakers put a ton of work into the first hour and a half but brought in the back-up producers for the last ten minutes. If The Hunger Games wants to be remembered as a movie that did the book justice, it is going to have to find a way to take the ending and make it memorable and conclusive. If not, then that crucial last impression will be lost.
So far, critics have been very kind to The Hunger Games (the flick currently sits at an impressive 90% on Rotten Tomatoes), so the indication is that all will be well come the moment when everyone from curious newcomers to excited die-hards sit down in the theater this opening weekend. Everything is in place, from solid actors and actresses (although the jury is out on Lenny Kravitz, sorry) to glorious set-pieces to all of the blockbuster moments fans remember from the books. All that is left is execution, and here is hoping that the biggest movie of the year delivers on all fronts. 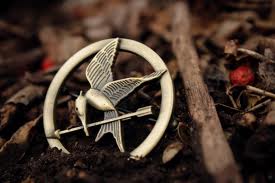 I almost ended this article with a line about how “the odds are in this one’s favor,” but then I remembered that I wanted to still have friends.
Posted by Tyler "Dazz" Daswick at 7:44 AM