The Prom Debate--Do the guys or girls have it tougher?

Prom is fast approaching, and this means for many a time of worry and stress and cramming in all of the final details. However, a debate arises. Who has the rougher waters ahead? Girls, with their elaborate make-up details and dresses, or guys, with their tuxes and corsages and God knows what else? We all know that prom is tough on everybody, but someone has to take the cake for the highest stress-ometer.    Emily Versen serves as an eloquent and persuasive guest-star/contributor in her case for the gals, while Tyler “Dazz” Daswick looks to capitalize on home-field advantage to bring it around for the underdog guys. The first ever According to Dazz point-counterpoint is here, and ultimately, the final opinion is left up to you.
Ladies first, of course, so Emily will look to set the tone.

Enjoy everyone.
The Case for the Ladies
By Emily Versen


Girls stress out about stupid things. How to look good for school without looking like they take an hour to get ready. How to go on a diet without people realizing that they are going on a diet. How to get that perfect “messy up-do.” Ever since Drake told them “sweatpants, hair tied, chilling with no makeup on” is when they are the prettiest, girls have been under a notion that beautiful appearance must appear to come naturally. So, they spend ridiculous amounts of time and money to come off as a “natural beauty.” On a normal day, it is all about being the girl who looks like she rolled out of bed looking gorgeous.
Prom night, however, is the one exception to this unwritten law of nature, and it stresses girls out more than most anything else they will encounter in their high school years.
Every single girl who goes to a high school prom has spent at least part of her middle school years fantasizing about the big night. Freshmen and sophomores secretly strive for the attention of upperclassmen, and, when asked, silently bask in the glory of knowing none of their other friends will be able to go. Prom has such a reputation for being the most magical, romantic night of a young woman’s life, that girls will go to desperate measures to make their experience live up to the ones they saw in “Cinderella Story,” “Mean Girls,” and even “Twilight” (no prom fantasy is complete without a romantically lit gazebo). Senior Bridget Bass elaborated, “Someone created the idea that prom is everything. For girls everywhere, prom is considered to be the "Cinderella" night, where . . . a girl can be the most beautiful girl in the room, and if she's lucky, she'll even dance with prince charming. Although it's just one night, every girl still wants it to be perfect, which is what leads girls to get fake tans, spend hours at the hairdresser, [and] buy an expensive dress.”
Girls want to have that special moment with that special guy. Kenyn Cheatham, another senior, explained this dream scene. “In a nutshell girls sort of want to be Hillary Duff . . . where we get our Chad Michael Murray-prince and look perfect—the most beautiful in the room.” 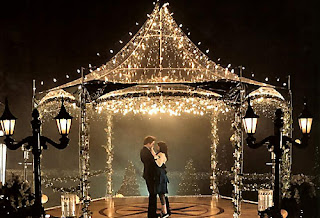 Girls want this, minus the future vampire baby.
With this goal in sight, girls do not care how much they spend on the perfect dress, shoes, nails, and hair. Prom is the one night where no girl will be accused of “trying too hard” or looking “fake.” Because, let’s face it, from the spray tans and hair extensions, to the uncomfortably tall high heels and acrylic nails, everyone is artificially beautiful on prom night.
Yes, it all seems very superficial. Paige Lindgren, junior, went as far as to say that, “It’s almost like a sports season,” and senior Nirali Patel affirmed the intensity with the claim that, “It's like we're competing in a Miss America pageant or something.” But hear this: that moment on the night of the prom when a girl walks down the stairs to her anxiously awaiting prom date and camera-ready parents makes it all worthwhile. When that special guy’s face lights up because she is even more beautiful than before, and her parents momentarily lose their breath, and her dad starts to tear up and cracks some joke about you growing up too fast—that is the reason for it all. Every girl deserves that cinematic moment in her high school experience. And I truly hope, this year, after all the time and effort, that every girl gets it.
The Case for the Gentleman
By Tyler Daswick
If girls think gearing up for prom is akin to basic training for the military, then guys must be in the Special Forces by now. Men (Yes, men. Not boys) have an enormously underrated role in preparing for the grand dance, and if it crossed your mind for a second that guys are coming out of this unscathed and baby-smooth, you could not be more wrong.
Girls cite the dress as a huge source of stress. Shop online, shop in the store, figure out what size to order, what color to order, all that. Here is my response to this: at least you have an idea of where to start. Let’s consider tuxedoes.
Now, ordering your tux with your date handy is very easy. They can simply point at the vest that matches and you can be measured and you are on your way. That is not what I am talking about here. I am talking about the tux experience that hits when you walk into the store with just a tiny picture of a color and your own stupid fashionably-unaware thoughts to guide you. It is absolutely horrible. Matching that dress color is especially intense. After all, you know that she worked hard to pick it out, so you better choose wisely. Plus, if you swing and miss, everyone will know who the big fat idiot is who could not figure out his little life long enough to match two colors (Who was the guy who changed his vest the day before prom last year because he realized his date’s dress was closer to the purple side than it was to the pink side? This guy).
Admittedly, however, the dress choice can be a tough one, and when you factor in hair and makeup and nails and everything of that sort, girls take the cake with the appearance side of things. After all, this is not Grease, and every guy at NDP is not rushing out to make sure they have the right comb and gel pairing. Girls score a big point.
But, guys score a bigger point. They score in the one thing that they absolutely must do, and that is to ask. Asking used to be really easy. In the “olden days” asking a girl to prom was exactly that, all a shy guy had to do was go up to Suzie Q (hey, it was the olden days, I am sure everyone was rocking the single-letter tag-along) and drop the bomb just like that. No fan fare, just a simple question. Our hero may have been nervous, sure, but at least he did not have to worry about actually being creative.
You know that point in every book or movie where things go from bad to worse? This is that time. In a scenario where the prospective couple was just two friends, the throwback method is really easy on the guy. She will say yes, of course. However, in a scenario where the gentleman is asking someone who may have just caught his eye (I did not know how to say that without sounding creepy, so at the end of it all I figured Screw it, it’s freaking 11:49 at night, I’m throwing it down. My process to a tee, folks), the waters become murky. How far do you go? Do you go with flowers? Cake? Cupcakes? Cookies? Something shareable, perhaps? Or does that make it seem too casual? But if you go with something individualized, do you seem too exclusive? What if it is a giant cake, will she think you expected her to eat the whole thing? Will she think she is fat after this?
No one knows. 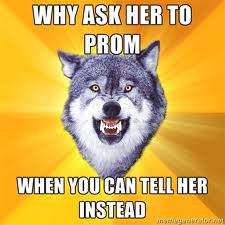 Oh, if only, courage wolf.
Maybe this thought process is a little more paranoid than usual, but the point is that asking a girl to prom is tougher than girls think. There is a ton of pressure, and a lot of this comes from the girl themselves. Girls want a perfect prom, and as gentlemen, guys try to do their part in having a totally kick-ass way to ask them out.
On top of this, you can assume the best case scenario, and the recipient of the invitation says yes, but what if it does not work out, and the girl says no?
Answer: screwed.
Try asking another girl. Now you are desperate, buddy. Plus she will know that she was your second choice. Ouch.
Try winging it and flying solo. That is cool, living the bachelor life, am I right? No, you are wrong, actually. Going alone to prom, as far as men are concerned, sucks. It flat-out sucks. Girls who go without a date have a right to be disappointed, but at least they can still have a good time dancing with their friends. Girls can dance by themselves because girls seem to be automatically good at dancing. When guys dance by themselves, they tend to look like primates.
The point is, a lot of pressure comes with finding that prom date. If a guy can pull it off, not only has he made a girl very happy, but he has saved himself from certain doom.
So here is what I have to say to all of the folks heading off to prom: no matter what you had to go through in gearing up for the night, just enjoy it. Everyone has worked really hard to be at their best, and this means that everyone will look great and feel great. Prom is easy for nobody, but when the night arrives each of us can kick back and just have a good time and be glad that all of the stress is over and done with.
Salute the brave men and women venturing to Prom 2012, for they deserve your sincere praise. The road has been long and arduous, but the band of brave survivors has emerged as a group of stronger, wiser, and better-looking people. As for those of you who still await your experience with the event, all I have to say to you is this: buckle up.
Posted by Tyler "Dazz" Daswick at 3:55 PM