The tricky thing about doing these running diaries is that whenever I cover sports events in person, I have a terrible tendency to compromise the actual article for my own fan experience. I want to cheer. I want to go crazy. I want to be in the student section. I want to lose my voice the next day and have everyone assume I am sick and then continue to find excuses throughout our conversations to stop talking to me so they can presumably go take a cleaner breath of oxygen somewhere else (that is how it works . . . right?).
My point is, in this running diary, which covers the Northwestern basketball game Sunday against the visiting #2 Indiana Hoosiers, there are huge gaps of time between blurbs, and these are mostly because I was busy telling some Indiana player to quit being such a little bitch about a foul call or yelling at Olah to take a shot for the love of Christ. We can talk about that later, though. Excuse the time gaps—bottom line.
I think this going to go well, how about you guys?
Here we go, NU hoops hosting #2 Indiana. Let’s see what kinds of crazy go down this time.

11:58—The Indiana warm-ups, as noted by the student section here in Welsh-Ryan Arena, look a lot like bowling shirts over pajama bottoms. Maybe more like Willy Wonka’s nightwear mixed with Waldo’s or the mustached guy from Monopoly. You be the judge. 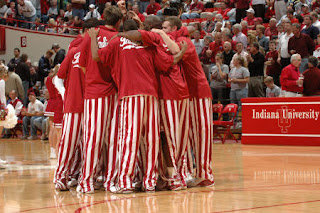 11:59—So in case you are not too familiar with college hoops, Indiana has a star forward named Cody Zeller, who happens to be one of the top projected picks in the next NBA draft. He is a pretty big deal. His nickname is also The Big Handsome, which is unfortunate for him, because he is anything but. Look at him. He looks forty, does he not? Like a white version of Greg Oden. You can just imagine him being a top five pick and then blowing out his knee ten games into the season. Yikes. This is morbid. Anyway, I digress—it is game time.

12:05—The whole student section simultaneously jumping up and down in unison really makes me wish we had more fans . . . what a shame.

12:07—Ladies and gentlemen, Jared Swopshire of your Northwestern Wildcats wins the opening tip against Cody Zeller! Wow! The fans are already going nuts. This is going to be a good one.

12:10—Three minutes into the action and Zeller misses his first three shots. The fans immediately take the opportunity to tell him that he sucks and that he will never make it in the NBA, and that he should have fun playing for the godforsaken Bobcats. I am loving this. The guy genuinely seems like a decent human being and we are all standing there telling him that his career will be one massive failure because he chose somewhere else to receive an education. Man, I love sports.

12:13—Zeller is fouled and immediately goes to talk to his coach about how to take a freaking foul shot. You stand behind the line and put the ball through the ring, you freaking circus act.
Was that cold? That was cold. Sorry.

12:21—Indiana fouls again, but this time it is some douchebag named Will Sheehey wearing the number zero jersey. General rule: if you wear the number zero during your sports career, you need to figure out your life. Case in point: Gilbert Arenas wore the number zero and he brought to a gun into his locker room. Thank you and continue to the next window.

12:24—Over on the Northwestern offensive end I notice that some little punk kid is in charge of mopping up all the sweat in the paint. He does a piss-poor job. He totally half-asses it. Right there is why we are losing—some dumb six-year-old is over there in the middle of our side of the court doing a crappy job of mopping up the sweat. Ugh, I hope they are not paying him anything.

12:29—Much to my sheer delight, Indiana’s number zero air-balls a three-pointer. Whataguy. He will probably go far one day.

12:30—A friend of mine, who shall remain nameless, leans back from the row in front of me and says the following, “If we dunk in this game, I will abstain from sex for a week.”
Ladies and gentlemen, this is Northwestern University!

12:35—Speak of the devil, Zero goes down the other end, drives to the lane, crashes into a Wildcat, lands on his feet, promptly pretends to be fouled, spins, does a flip or some shit like that, crashes to the ground, flails wildly like some sort of weird mudfish, and yells for a call. The ref comes up, literally leans down to look into his eyes, blows his whistle right in his ear, and calls charging. No basket, Northwestern ball.
Man, I love sports.

12:43—Well, we have been here for more than half an hour and the ‘Cats have yet to break ten points. Olah needs to jack up a shot. Honestly, if Olah took a three on every single possession and we lost, I do not think anyone would care.

12:46—My buddy Ben, a future sports journalist, proclaims loudly, “Indiana’s going to be tough to beat this year.”
I think Iwill let my friend Mary Poppins respond to this one.

12:49—As the ball goes out to Swopshire in the corner, I realize that I become instantly on-edge every time he has the ball. I just have no idea what to expect. He could do a crazy dunk, he could take a difficult shot, or he could pull something weird out of his ever-growing fro. Classic sign of Northwestern hoops right there. Except the fro part. We do not have many of those.

12:52—Zero comes back into the game to talk to the ref, probably to try and try some weird behind-the-scenes bribery stuff. I hate that guy.

12:54—We cut to halftime. Sitting in the stands, I realize the show is going to involve young girls. This seems to be an odd trend in basketball games I attend, and yeah, it disturbs the hell out of me. This even happened during high school. Unbelieva—WAIT, WHAT THE HELL IS THIS?!
This iswhat the hell this is.

12:59—Throughout the entire phenomenon, we debate everything from who choreographs these sort of routines to how one actually chooses to follow this activity, but one thing was never debated: that this whole thing is a sport. Absolutely. Gosh, did you see the human jumprope?! Look that up.

1:07—During second-half warm-ups, I notice that Aaron Liberman has a kippah made by Under Armour. I had no idea this was a thing. I am blown away. Nike has them too. Wow, just wow. It needed to be said.

1:15—Number Zero enters the game toward the beginning of the half and promptly fouls somebody. At this point I am just saying it to say it. He does not even dignify further coverage.

1:28—Number 32 on Indiana check into the game, and based on the reaction from the (huge number of) Hoosiers fans, he is a fan favorite. He also looks like a convict—like Indiana has to pay his bail each week to play basketball and after every game he goes straight back to the can. I am afraid of him.

1:34—Some Indiana player is poked in the eye and goes over to the ref in dramatic response. Instead of sending him to the damn bench like a normal ref, the official puts his arm around him and probably tells him to stop crying and that everything would be okay. This game just sucks.

1:35—Swopshire dunks the ball on a fast-break steal, and abstinence was enjoyed by all!

1:40—Zero fouls again. There was much rejoicing!

1:43—A ‘Cats three is followed by a block at the other end! We are within eight points of second-ranked Indiana! The student sections are going nuts! Indiana calls a timeout!
During the timeout itself, Indiana brings special red chairs out onto the court so the payers do not have to walk the extra three feet to the bench. How can anyone look at that and not think it is anything except pathetic? Ugh, Indiana is really dang weird.

1:45—Zeller misses a dunk, and Olah finishes on our end! We are within six! Excuse me while I go crazy for thirteen minutes!

1:58—It is a five-point game now! There are two minutes and thirty seconds to go! Gaaaaaaahh! This could be legendary!

Things really were insane at the end there, sorry guys—definitely some jumps in time going on. At some point, one of the cameramen had to come on to the floor where our offense was trying to do work, and he had to mop up the sweat because the little punk who was supposed to do it was not doing it! The ref pointed out the sweat! He had to stop the game to point out the excess of sweat on the ground, where we were trying to win a basketball game!
This was unacceptable, but either way, you have to be proud of how our ‘Cats played against Indiana. No one expected it to be this close at all, and would you believe it, we made it a pretty good game down the stretch. Sure, were there some issues with sweat-mopping? Yes. Was the halftime jump-rope spectacle at times more athletic than what we saw on the court? Indeed. No matter though, because we saw our Wildcats play a solid game against a good team. I am proud of our guys out there, and I know that sometimes these articles can be tough on the
We also learned to never ever wear the number zero . . . hold on, do you guys know if anyone on our team wears zero on his jersey?
Let me check. Hold on.
Omar Jimenez. Oh no.
Posted by Tyler "Dazz" Daswick at 8:00 PM