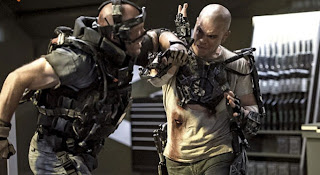 This summer, we have yet to see the movie. That is, the killer app that alluringly drags us to theaters, slams us into chairs, and blows us away whether we were ready for it or not. Elysium was poised to be that flick—the director and writer of the best sci-fi movie of the past five years brought aboard our main man Matt Damon for another original on-screen story. Sign me the hell up for that.
Did it pan out, though? Not quite—you have a solid sci-fi here, but not something that captures the same magic that District 9 did in 2009.
The premise here certainly brings the intrigue, even if it paints on some similar class-warfare tones that D9 presented. Matt Damon plays Max, a convicted felon out on parole in a dense, over-populated Los Angeles in the 2100s. Above the planet-wide slum that is this new Earth hovers the alluring Elysium, a massive space station where the planet’s elite have taken refuge from the squalor. Elysium has a cure for cancer, lush greenery, and many a garden party. Naturally, people on Earth regularly try to break onto the utopian station—too bad they are all shot on arrival. Yeah, things kind of suck in Matt Damon’s neighborhood, but after a deadly dose of radiation and the addition of a sweet-ass exo-suit, he looks to make his way up the orbiting paradise, and (surprise surprise!) maybe save Earth in the process.
Easily the standout of Elysium is the action. Director Neil Blomkamp’s track record of sweet weapons and videogame-esque set pieces is only extended here, and some of the best scenes revolve around the featured exo-suits for both Matt Damon and one of his future nemeses (no spoilers here, sucka). All the futuristic tech is flat-out sick to see in action, whether it’s the tracer rounds that attract mobile explosives, bullets that explode within a five-meter radius of the target, or the criminally-underused ChemRail. It is enough to make you wish Elysium was a videogame, which may or may not be a good thing.
See, the movie’s biggest issue is that, while it sets the stage for the examination of some pretty mature themes, it never quite achieves the depth that we know Blomkamp can achieve. Characters feel under-written, the relationship-developments are a tad cliché, and while Jodie Foster initially presents an intriguing villain as the ruthless, cutthroat Secretary of Defense on Elysium, but (trying hard not to spoil anything here) the script eventually throws her the finger in favor of more traditional science-fiction fare. It was a jarring, disappointing turn for a flick that, despite some holes here and there, at least had the integrity of trying something original. It makes even less sense in retrospect than it did while we were watching.
The cast in itself does a decent job with what they are given, but the truth is they just are not given much to work with. I would hesitate to call it a waste of talent (harsh much?), but with Damon, Foster, and the surprisingly-versatile Sharlto Copley (he was the lead in D9), it is hard not to wonder why this movie was not able to attain more emotional depth.
That, ultimately, is Elysium’s undoing—while everything on the surface looks great, from the terrific cast to the spectacular sci-fi imagery to the acutely-detailed world, beyond the surface there just is not much. Even the parable-like themes are not explored as much as they should be, and are indeed lost in the shuffle along the way. Many times we come this close to having a great scene or a great moment, but the movie never quite seals the envelope. We never have the moment. It is too bad.


Comparisons to District 9 might seem unfair at first, but when the writer, director, actor, and underlying theme are all the same, it invites the question why Elysium cannot quite do what its predecessor positively triumphed at—bringing the emotion. The segregated world of Elysium is well-realized and really interesting, but thanks to some hard-to-ignore plot holes, a lack of emotional punch, and the underwritten characters, the movie never truly satisfies. The seamless visuals and balls-out action will make you glad you saw it, but once you leave the theater there just is not much to remember. There is more to talk about what could have or should have been here than what actually is. It is an acceptable sci-fi, but it is not the movie this summer.
6.5/10.
Posted by Tyler "Dazz" Daswick at 9:24 AM