A Season of Creativity: A Title-Based Winter Movie Preview

Holiday movies usually mean family affairs. All of the hip young people are too busy swapping ugly sweater parties and all of the old people do not feel like spending the hour and a half it takes for them to bundle up properly and go outside. This leaves the middle-of-the-road folk to do their best and keep those squirmy little kids in line long enough to sit through a movie about how (Fill in the blank) Saved Christmas. Holiday flicks, or winter flicks in general, do a good job of giving you that fuzzy feeling (Is that really the right word? I wish I knew the guy who thought that sounded like a feeling you want to have), but oftentimes lack in the quality department.

This year, like most years, seems to be hit-or-miss in the movie sense of things. It seemed that everyone spent more time trying to think of an intriguing title rather than fleshing out a solid movie. So that is what we are looking at this season: titles. Get ready for a mouthful.
Sherlock Holmes: A Game of Shadows—12/16
The first Sherlock was fun, but it was basically an excuse for the producers to make some money while they fleshed out the real villain of the Holmes’ legend: Colin Moriarty. This one looks to up the ante in both the action and nemesis department, and with any luck, it should surpass the original in just about every way. With an approach like that, there is not much to argue with.
First Impression: Worth a look.
Title Rating: 5/10—Informative, but lacks that creative zing.
Alvin and the Chipmunks: Chip Wrecked—12/16
Head desk head desk head desk head desk head desk head desk head desk.
First Impression: Good God.
Title Rating: 0/10—Facepalm.
Mission Impossible: Ghost Protocol—12/21 (12/16 IMAX)
I was not excited about this movie until I wrote this article. All that mask-pulling, gum-chewing, wall-climbing, motorcycle-riding action is coming back in a tidal wave of special effects and adrenaline-laced black leather. Impressive stunts and huge set pieces are going to blow your mind. Plus if you go the IMAX route, you have a Batman preview to anticipate.
Also, Ethan Hunt has long hair again. That is all.
First Impression: DUN. DUN. DUN-DAH-DUN. DUN. DUN-DAH-DUN. DUN. DUN-DAH-DUN. DUN. DUN-DUN-DA-NA-NAAAAAAAAA. DA-NA-NAAAAAAAAA. DA-NA-NAAAAAAAAA. NA-NA!!!
Title Rating: 9/10—Pure badassery. Money in the bank.
The Adventures of Tintin: The Secret of the Unicorn—12/21
Here is the extent of my knowledge about this movie: our friend Tintin is a boy detective and his dog is named Snowy. That is pretty much it. There is something about a shipwreck and a riddle and some sort of pirate-esque buried treasure. If this does not tickle your fancy, then you at least have some of the most visually-impressive 3D effects and CG-animation that has ever been put into theaters. From what I have seen so far, it looks to be worth more than the title lets on, so maybe it is worth your time.
First Impression: Steven Spielberg did what?!
Title Rating: 7/10—It sounds like a line of Barbies.
War Horse—12/25
Maybe I am way off on this, but it seems like Homeward Bound with a horse. War Horse follows the story of Joey, our equestrian hero, as he journeys from England to France during WWI. He meets many people along the way, and he apparently has a profound effect on those he interacts with. I am tearing up already. If you are into horses it could be pretty cool; Joey looks like a total beast (as in a highly-skilled horse, not . . . you know what forget it).
First Impression: I bet a hundred bucks he dies at the end.
Title Rating: 3/10—They tried, I guess.
Extremely Loud and Incredibly Close—12/25 (limited), 1/20 (wide)
A young boy’s father, who is also Tom Hanks, dies on 9/11. His mother, Sandra Bullock, is his only caretaker, and one day the child (by the name of Oskar) finds a key left by his father and goes off to find the accompanying lock. Sounds simple, but it looks to cut much deeper.
The outcast-child-who-is-really-special cliché is given a new twist with the emotional impact of September 11th, and if this movie can be dramatic and impactful without being cheesy and obnoxious, it will succeed.
First Impression: Tom Hanks, hell yeah! The kid kind of looks like Dobby though.
Title Rating: 8/10—Someone in the movie will probably use the phrase in a line of dialogue, so you know it fits. 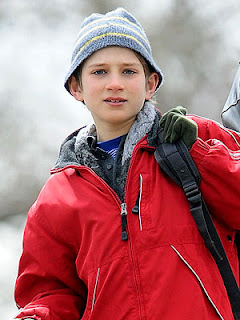 Ugly human being, or house elf? You be the judge.
The Devil Inside—1/6
Another demon movie! If you have seen the trailer for this one, then you know by now that it looks really freaking messed up. If you have not, then look it up and go cry yourself to sleep.
It is one of those documentary-style flicks, but it seems like these cameramen are either incredibly brave or robots, because when the freaky stuff starts going down they have the steadiest hands I have ever seen. You thought finger-breaking was bad? Wait until the chick in the trailer breaks her shoulder. In the trailer. No thank you.
First Impression: Isn’t “Devil Inside” that song by INXS? How bad can this be?
Title Rating: 7/10—Like I said, pretty good INXS song.
Breaking Dawn Director’s Cut: Everyone Dies—1/6
I wish.
First Impression: Like a beautiful dream.
Title Rating: 11/10—Nevermind the spoiler, this is just a heaping pile of victory.
Beauty and the Beast 3D—1/13
Another Disney cash-in, except that it is actually worth seeing. A quality flick in the hands of Disney folk to make it even better means a cash-in that will cash in (this thing is too long when I start making little puns like that).
First Impression: I wonder if after all these years I will still want to punch Gaston in his stupid square mouth. Probably.
Title Rating: 10/10—It is the work of Walt. You want to argue with Disney classics? Come at me, bro.
The Grey—1/27
Why does a plane crash in the frozen wilderness? Because Liam Neeson told it to. Why do eight people survive? Because Liam Neeson let them. Why do wolves show up? So Liam Neeson can tie broken bottle pieces to his knuckles and administer the pain.
Best plane crash ever.
First Impression: I swear if this movie is overly-conscious of race . . .
Title Rating: 2/10—The Grey? Really? More like Super-awesome Liam Neeson 90-minute fight scene. With wolves.
Journey 2: The Mysterious Island—2/10
Remember when Dwayne Johnson was actually cool? Yeah that seems like a freaking mile away now. This is actually a sequel to Journey to the Center of the Earth, believe it or not. That book is classic literature; I own a copy myself. It is pretty good, a lot of people die and there is a cool sea monster that lives in this giant underground cavern with an ocean inside. Oh, sorry, were we talking about a movie? It looks crappy. Read the book. Even if you do not read, it will be a better use of your time than this piece. But hey if you want to see The Rock make a fool of himself, be my guest.
First Impression: Wait, what was Journey 1?
Title Rating: 10/10—This one has so much intrigue! First of all, you are left wondering what the original movie is, like I was. It reminds you of the band Journey, which will carry you through the trailer quite nicely. Lastly, you have an island of mystery, which we have only seen in about fifteen billion freaking movies in the past decade, so you know it will present something fresh and exciting.
Puke.
Well, I suppose the winter season hold something for everybody. Do I think that anyone’s socks are going to be knocked off by any of these flicks? Probably not, but keep your eyes open for any sleepers in the making. So bundle up and head on out this season, because whatever it is you are looking for, you will probably find it.
Good luck everyone.
Just a little something to tide you over.
Posted by Tyler "Dazz" Daswick at 3:31 PM