What Goes Around Comes Around: How Tim Tebow Changed my Mind

A while ago, I wrote an entire article trying to figure out why I could not stand Tim Tebow. It did not help. I just wished everyone would shut up about the guy. His throwing motion was atrocious. He was not supposed to succeed in the NFL. He was not supposed to be a good quarterback. He was not supposed to win, for goodness’ sake. I just wanted the talk to go away so the Tom Bradys and the Ray Lewises of the NFL could take back the spotlight over someone who I was certain was fated to become a journeyman. It drove me crazy. 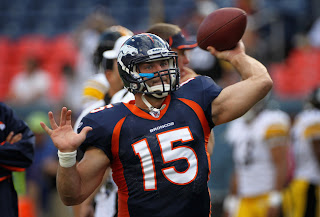 Just . . . ugh.
But then something happened that made me extremely upset, and it was strangely a piece of negative Tebow Talk, which I normally delight in. A certain morning show host on a certain valley station with call numbers that may or may not be X103.9 (see what I did there?) had a few things to say about Tebow following the quarterback’s thrilling overtime win over the defending AFC champion Pittsburgh Steelers (who I hated even more than Tebow, but that’s another article).
Everyone knows about “Tebowing,” the pose taken from Tebow’s end-of-game prayer posture. Of course, after Timmy threw his touchdown pass, the very first thing he did was kneel in the end zone and have a quick little chat with God. Classic Tebow. There he goes again. All that.
So the aforementioned radio host sees this and decides he is going to poke some fun at Tim Tebow. He declares, on the air, that Tebow’s actions are one giant publicity stunt designed to garner attention.
If Tebow is not one thing, he is not a fake.
Faith is not a publicity stunt.
This is the moment I sided with Tebow, and this is the moment that I realized what I should have really been paying attention to all this time. Tebow is one of the most incredibly true people I have ever met. He is true to his faith, true to his morals, true to himself, and true to everyone he comes in contact with. I love that.
We are supposed to look up to people like Tim. Other sportsman can satisfy our need for an athletic mentor (Because, come on, with Tebow’s throwing motion . . . would you want to take after that? Yikes!), but Tim should be the one we look to as a guide for just about everything else. You want to know how to be pure? Look to Tim. You want to know how to have faith? Look to Tim. You want to know how to touch people’s lives? Tim has that answer too.
I wanted people to shut up about Tim Tebow altogether and just let American sports slowly fade back to normal, but then some folks crossed the line. Tebow does not force religion on anybody; he simply makes it known what he believes. Accusing someone of being a liar in their faith . . . well does that not make you sound like an idiot when your voice is heard by thousands of people itself?
I believe that Tim Tebow is someone that we need to look at in terms of what kind of person he is, and we need to forget about what kind of athlete he is or is not supposed to be. I was talking to someone the other day and we were saying that if Tim Tebow was a tight end or a fullback, he would be our favorite player in the NFL, hands down. Great guy? Of course, love him, yadda yadda. But as an athlete? Blech.
Well, I have decided that Timmy Tebow is my favorite person in the NFL. He would sooner talk to kids in a hospital than have a post-game interview. He would sooner tell his coaches about the cancer patient he invited to the game than tell them about the comeback he just drew up.
The world needs to look at Tim Tebow as someone to learn from. He is someone we can back not because of his on-the-field accomplishments, but because of his off-the-field commitments.
It can be easy to forget those things about an athlete that do not have to do with sports. Luckily, Tim Tebow will not let us forget those things. 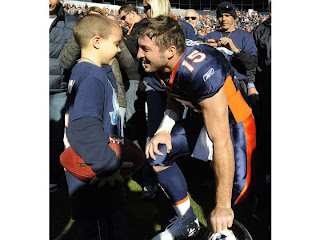