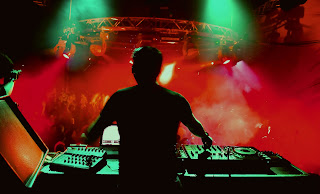 Perhaps Dre said it best when he blamed it on Ice Cube: “Because he says it gets funky/When you got a subject and a predicate./Add it on a dope beat/and that’ll make you think.”
As any self-respecting DJ will tell you, Dre knows that the key to any great hip-hop or rap song is that killer groove behind the rhymes—you know, the steady line that makes you put your hands up or bob your head or just downright get funky with it. My father (who, by the way, loathes this kind of music, and therefore knows nothing about this article) lovingly calls this phenomenon “the kathunka kathunka.”
Over the years, hip-hop and rap has solidified itself as a music mainstay, and many modern artists, such as Eminem, Nas, and Tupac Shakur, have already earned their way into several “Greatest Artists of All Time” lists, largely for their lyrical prowess. But today, we want to show some respect for guys like Dre, and we want to highlight some beats that just refuse to grow old. These are the beats that survive on their own, without the words. These are the beats that demand to be mixed and mashed and emulated and honored. These are the beats that made people stars. These are the Beats That Never Die.

It Was a Good Day, Ice Cube


You hear that? That is music, friends! Something really terrific about old-school rap is the pure emphasis on laying the spoken word over actual music, and not just a pulsing bass line. A great example is “Good Day”. So relaxed, so mellow, and completely worthy of a windows-down drive through areas of town where you will not be shot. The feel is almost jazzy, and if you play an instrument, you might just hear some improvisation opportunities sprinkled throughout this one. This one is beyond just a solid beat, it functions as a totally liable song, sans-Cube. And the best part? He still does not have to use his AK.

Dirt Off Your Shoulder, Jay-Z

I know we just lauded the use of “real” instruments, but electronic beats certainly have their place too, not the least of which is evidenced by Timbaland’s absolutely dirty throw-down with Shawn Carter here. Remember when we talked about beats that just make you move? Coming right up. Put on some headphones and crank this one—to say that Timbaland brings the bass is absolute sacrilege. He crushes that bass line. It charges your ears in one of the nastiest aural assaults of modern rap. It just plain kills.

Let’s keep it current for a second. More and more nowadays, songs are relying on simple series of notes to create something catchy—think along the lines of Tyga’s three-tone “Rack City” or MGMT’s nine-note keyboard line on “Kids”—people remember simple stuff; easy to hum, easy to whistle—this stuff is why things are stuck in your head. 50’s “In da Club” totally nails this phenomenon. With three little bum-Bum accents, we have one of the most versatile party beats of the last decade. It does not matter if you have never been up in da club, rolling 20 deep, or mistaken for a player or pimp, when this song comes on, it stays on. And when people like P. Diddy, Lil Wayne, and (wait for it!) freaking Beyonce are borrowing the tune to lay over their own lyrics, you know you have a good thing here.

No Sleep Till Brooklyn, Beastie Boys

Did anyone combine rock and rap more effectively than these guys? The debate is there, and this song’s timeless riff embodies the duality of the entire group. A rap song with a guitar solo? Madness—but it is mad genius too. What makes this instrumental absolutely legendary is its universal appeal: rock fans can do guitar covers, drum covers, etc., and rap fans can lay down their own rhymes. The modern fan might point to Eminem’s “Lose Yourself” as a terrific use of electric guitar within a rap song, but this song did it more than fifteen year earlier, and the style is so much more in-your-face, outrageous, and badass that this simply demands the nod. When you hear this riff, you know it is Beastie Boys, and you know it is good.

Is a defense even necessary? This is still a dance floor staple, it features a perfect blend of live instruments with electronic sounds, you recognize it as soon as you hear it, and it is the pure epitome of a head-bobbing, hands-up jam. Oh, and the video was shot in the Thunderdome from Mad Max. California does indeed know how to party. Thank you and please drive through.

Sorry, what was that? I had some trouble hearing you over the combined sound of this absolutely nasty beat and the freaking President of the United States saying he has some of this on his iPod. With an intro this monstrously epic, you know the Commander in Chief is queuing up some “Fireman” when he rolls into the Situation Room. You know what? This beat kicks so much ass, it demands a certain partnership. You are thinking it. I am thinking it. Let’s just watch some guys do a slow-motion walk away from an explosionwhile we play this tune.

The Next Episode, Dr. Dre

This tune featured a lot of big names, from the Doctor himself to Snoop Doggy Dogg (as he was then called—and don’t even tell me you hate Snoop Lion! It’s still Snoop, he’s always going to be the D. O. Double-G, so quit your moaning—you’d still totally chill with him—let the dude evolve!) to Nate Dogg to some guy named Kurupt (who, after a quick Google search, I found has been nominated for a Grammy, in 1996, for a song he did with someone named Daz—whaddup). What makes this beat really classic is, aside from its catchy simplicity and dance-ability, it somehow manages to fit the style of all of the artists involved with the song. It sounds like a Dre beat, it sounds like something either Dogg would jam with, and I am sure that all 19 of the die-hard Kurupt fans out there would agree that it works for him too. We have thrown around the word “versatility” a lot in this piece, but this beat is just another example. Dre—whataguy.

Oh, shut up. Even the most modern of rap music can churn out killer beats like this, and do not tell me that you never busted one out on the dance floor trying to ball so hard and all that other fun I-have-trouble-relating-to-this-song-in-real-life-because-really-why-is-Kanye-talking-about-fish-filets stuff. This beat is dope, and it is the reason that we have been the audience to about fifty-million remixes and mash-ups in the past year and a half. You know the song as soon as you hear those first two notes, and even when Kanye reminds us yet again that, seriously guys, we better not let him into his zone, the bass is cranked and you still think it is damn cool. This was the beat of 2011, and we are going to keep hearing it for a long time to come. Instant classic.

A moment of humbling honesty here: this song was a last-minute addition—it overtook Lloyd Banks’ “Beamer, Benz, or Bentley” (I know, I know) and Lil Wayne’s “Six Foot Seven Foot”—and I will tell you why. Both of those songs have great beats, but they are straight-up repetitive. “Ni**as in Paris” up there is successful largely because of its continued breakdowns and switch-ups—it is easy to listen all the way through without stopping. Not so with Banks or Wayne’s tunes. It is the same line over and over, and while “C.R.E.A.M.” has moments of repetition, the groove itself brings enough components to keep things fresh, even while the notes stay the same. They add vocals, accents, oohs and ahhs. It creates a massively-effective song that can be a mellow, sit-back-and-bob-your-head tune for one listen, and then a dance tune for another listen. Wu Tang Clan brought us something completely original and inventive—a timeless tune, that works at any time.

You have to end with a crowd-pleaser. Done over and over again, “Paper Planes” is one of those songs that somehow everyone just seems to know. It runs amuck through popular culture even today, and you see it everywhere from movies to parties to radio to ice cream shop background-music. It simply has not gone away, and thanks to some of the best use of sound effects in rap history (those gun-shots with the cash register—genius—to make them such an integral part of the song was bold as hell, and now you have one of the most recognizable sequences in the last decade of music), it just might stick around a while longer. Sure, the main riff might have borrowed from The Clash, but is that really a bad thing? The spin it received was great enough in its own right. We will remember this tune as a staple in the world of hip-hop and rap.

Have a song you feel should have been on the list? We want to hear about it—let us know via Twitter or Facebook! Special thanks goes out to reader and friend Jordan Costello for his much-needed insight and opinion into the world of hip-hop and rap; you were a great help, friend!
Posted by Tyler "Dazz" Daswick at 7:08 PM